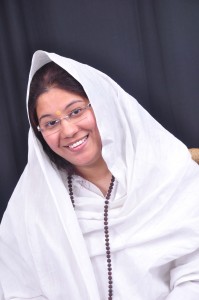 A revolutionary personality, she is privileged of being called the First Sadhika of ‘Shraman Sangh’. Being first of her kind, her diksha was recited by Shraman Sanghia Salahakar Bhishma Pitamah Rajarshi Sumti Prakash ji Maharaj under the guidance of her sister and Guru, Pujya Sadhvi Vaibhav Shri Ji ‘Aatma’. The direction and inspiration to take such a courageous leap was given to her by Viraat Guruji.
She masters various subjects, like Astrology, Vastu, Tantra, Mantra and Yantra, the complete knowledge of which was imparted to her by Pujya Shri Viraat Guruji. His knowledge is carried forward through her that resolves all kinds of problems of people. Different remedies are suggested and varied poojas and anushthans, given by Viraat Guruji, are conducted by her. She is the now torchbearer of Guruji’s knowledge, resolving problems through different customized remedies and varied Pooja’s and Anushthaans. She exhibits right understanding of religion and spirituality and very well explicit s the science behind it. She also ties-knots by following Jain Vivah Sanskaar taught to her by Guruji. Versatility personified she is an excellent orator and conducts workshops and seminars on Astrology , Vaastu, meditation and other such related topics.

She even guides people into meditation through different techniques like catharsis, gibberish, virechan, which assist in removing stress and excessive thoughts resulting in dramatic improvement of physical and mental well- being. She, through her innovative technique, specializes in balancing five elements in our body, which not only removes the malefic effect of planets, also assist in person’s growth and spiritual development. She even carries in depth knowledge of Yoga, naturopathy and other holistic sciences which when merged together, in balanced way, under her guidance transforms the person physically, mentally and spiritually.

Privileged to be called ‘First Sadhika’ of ‘Shraman Sangh’ courageous Sadhika Pawniji is imparted with mastery over Astrology, Vastu, Tantra, Mantra and Yantra from Shri Viraat Guruji. She provides remedies to variety of problems through Poojas and Anusthaans. By Grace of Guruji she also ties nuptial bonds influenced by Jain Vivaah Sanskar. She also performs guided meditation using different techniques such as catharsis, gibberish, virechan for holistic well-being.