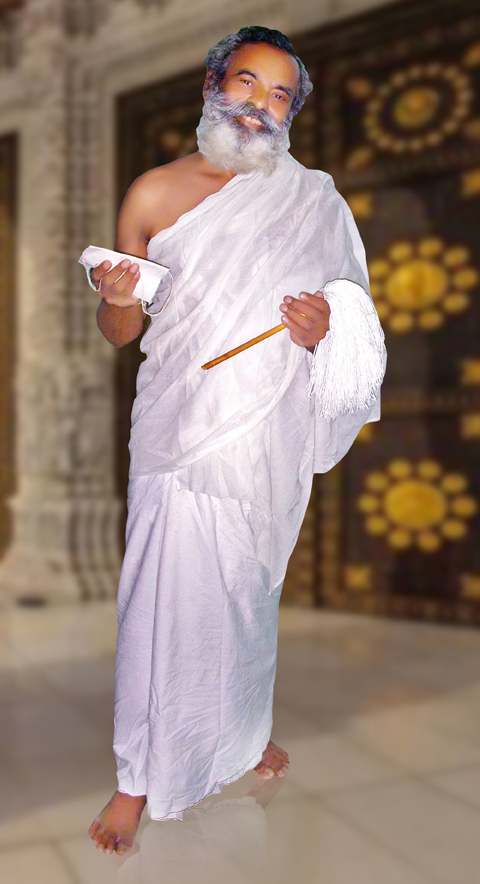 This celestial personality served the humanity from 24.01.1948 to 02.12.2012. Born into a prosperous Jain family of Jodhpur to Mr Sawant Rai Kanungo and Mrs Bakshu devi, he was named Ghewar Chand.

Poems with deep meanings flowed effortlessly through him since his early childhood, thus known as ‘Kaviraj’ among his friends. He fearlessly stood against social evils and exposed the hypocritical nature of the men in power through the might of his pen. He was brilliant and revolutionary. Being a research by nature, he always said ‘Experience and then believe’. With this rare mindset he began his quest to discover religion in its truest sense. He visited various religious preachers of almost all prevailing religions to satiate his curiosities. Baffled by his intriguing questions and deep insight, more often than not, they were unable to satisfy him. At one point in time, he even decided to renounce the worldly pleasures and assume ‘Jain Diksha’, however, after keenly observing the prevailing duplicity, jealousy and politics even among the so called religious preachers, he gave up the very idea and continued his own way, living like a lotus in this world. Being widower once, he remarried and was blessed with four children, three sons and a daughter. He was the pioneer in manufacturing aluminium toys in India. Besides being an extraordinary writer, poet and entrepreneur, he possessed exceptional expertise in subjects like Astrology, Ayurveda, Mantra Vigyaan, Tantra Vigyaan and Vastu. Duly fulfilling his responsibilities, he continued with his pursuit for truth.

Acharaya Samraat Shri Vijay Shanti Surishwar Ji “Mandoli Wale” guided him celestially. By his grace, he experienced the absolute truth in the state of deep meditation and renamed himself as ‘VIRAAT’ meaning the unbounded vastness and since then he has been known as ‘VIRAAT GURUJI’.
Viraat Guruji was well versed with the scriptures of all religions visually- Jain Aagams, Vedaas, Upnishads, Geeta, Quaran and Bible. He unveiled the hidden meanings of Sutras which were hitherto unsaid and unheard.

Just by being in his benign presence, the person’s life energy elevated headway, marking the beginning of their spiritual journey. He bestowed his knowledge in such an enlightening way that for an unprejudiced and Yogya listener, his words transformed into their experiences relishing them with glimpses of ‘SATYA’. He continued to teach till his last breath.

Now his work of transforming lives is being carried forth by his disciples through Charammangal under the proud leadership of ‘Pujya Sadhvi Shri Vaibhav Shri Ji M. S’

Enlightened by Acharya Shantisurishwar ji Gurudev Pujya Viraat Guruji was a brilliant, fearful and revolutionary personality. He was well known as ‘Kaviraj’ (King of Poetry). He always spoke his persona – ‘Experience and then believe’. He is a perfect example of learning that one can achieve highest spiritual state remaining in worldly life. He continued his pursuit for truth inspite of possessing exceptional expertise in Astrology, Ayurved, MantraVigyaan, Tantra Vigyaan and Vaastu. Upon Shanti Gurudev’s’ blessings; He experienced absolute truth in state of deep meditation and got renamed as ‘VIRAAT’- Unbound Vastness. Just by being in HIS presence many experienced an elevation in their energy, initiation of their spiritual journey, glimpse of ‘SATYA’ – The Ultimate Truth.