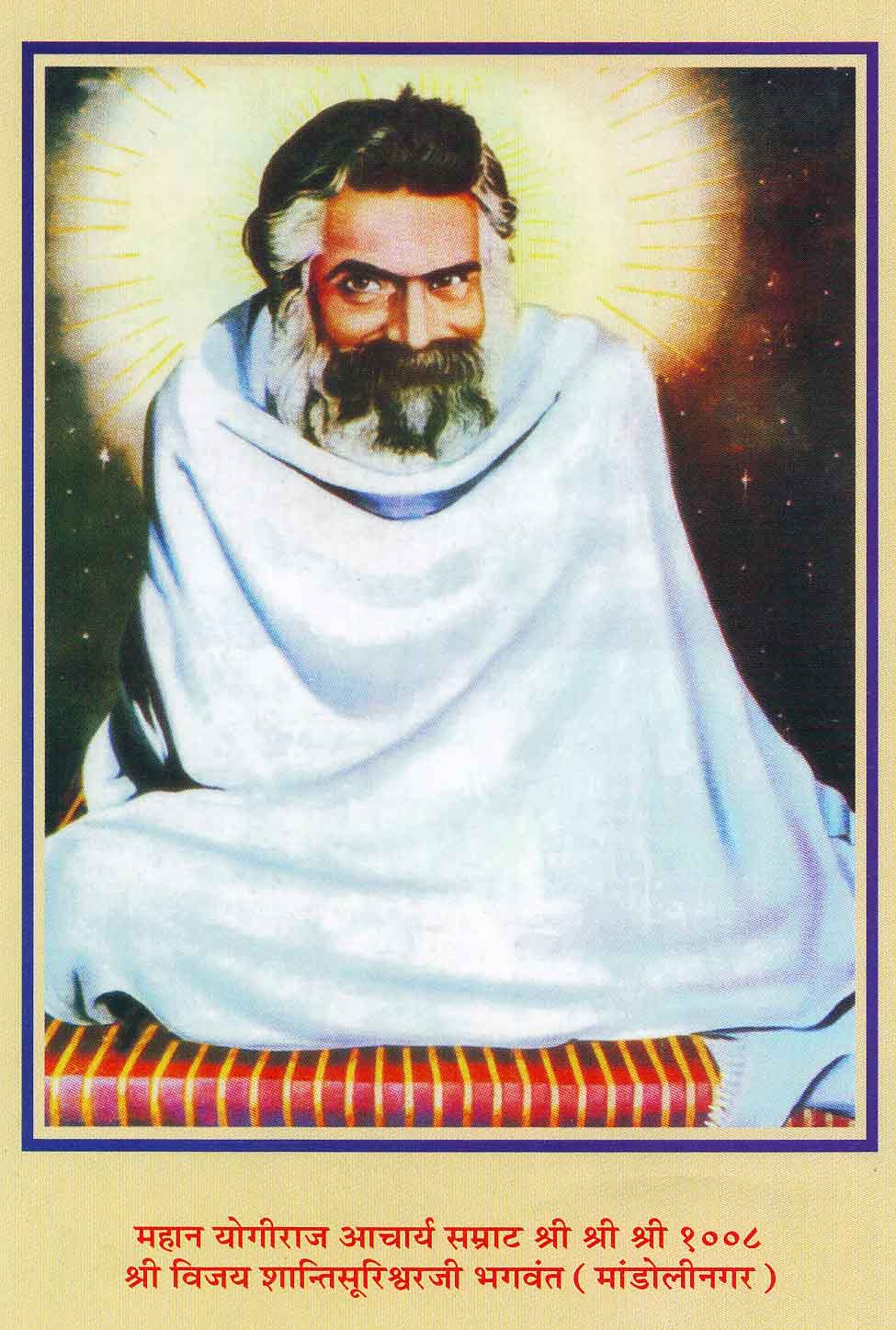 ‘Extraordinary is often hidden in the garbs of ordinary’ and lucky are those who can perceive the greatness behind their simple appearance as they are the ones at whom the grace of such noble souls befalls. What can be seen of great men by our mundane eyes is just tip of the iceberg, hence making any opinions about them after seeing ordinary actions being performed by them is our biggest disillusionment.

Born to Shri BhimtolaJi & Smt. Vasudevi, in the year 1892 the blessed child was named SAGOJI. His birth place was Village Manadar, Sirohi District in Marudhra Pradesh. At the mere age of eight, the divinity in him was recognized by his Gurudev Shri Teerth Vijay Ji Maharaj and he took the child with him, thus marking the beginning of his supreme journey.

As Sagtoji turned sixteen he undertook Sainthood under Tapagach of Jain Sadhus and since then he was known as Shri Shanti Vijay Ji. Soon after the initiation, receiving direction from his Guru, he had gone to the scary forests of Abu, where he went into deep meditations and practiced severe austerity, while observing complete silence. Very often Lions, Cheetahs, foxes, etc, were found sitting near him, it was felt that his immense peace even mellowed down the feral tendencies of such wild animals.

During this period he received celestial guidance of Dada Gurudev Shri Dharm Vijay Ji and with his blessings his path was enlightened. Goddess of knowledge ‘Saraswati Devi’ was ‘Siddh’ to Him and with her grace he could recite all the Holy Scriptures and could speak in numerous languages even though he never went to school.

With his blessings the controversy of Jain Teerth ‘KesaryaJi’ was resolved. People of many faiths claimed that to be their Teerth, however, Gurudev gave divine direction to then Mewar Raja Bhopal Singh in his dream, who then passed a circular in the Gazette signifying that the Teerth belonged to Jains only. To resolve the conflict between Jains and Brahmins, Gurudev had to go to Mewar, however his entry was restricted by then Minister Shri Sukhdev Prasad Ji, using the divine energies He was seen in the said destination at given time and place. Seeing the extra-ordinary display of supernatural powers all the dumbfounded officers and Police bowed before him. Seeing this miracle he was graced with the honour of ‘Yug Pradhan’.

His message is of ‘Universal Love’, he stated that crux of every religion is to love unconditionally. This message was well received by people of different religions and countries who became his followers. Gurudev had deep compassion for the animals and the environment. Listening to his discourses many kingdoms banned animal sacrifices and thousands of people took oath to lead a life free of vices. In his teachings gurudev inspired people to observe silence for an hour every day. He motivated people to perform their rituals and religious practices after gaining the complete understanding about it. He stated, ‘Right understanding leads to knowledge and complete knowledge is Enlightenment’.

Gurudev took Samadhi in the year 1945 at the age of Fifty four. Following his instructions, His body was cremated in Mandoli Nagar, which is now a renowned pilgrimage.

Whoever goes to His door with trust in his heart, his sufferings are removed, his problems are resolved and he is blessed with right perception and knowledge even today. His Bhaktas from all over the world pay their homage at His temple in Mandoli Nagar, every year and receive his divine care and love.

Pujya Viraat Guruji received abundant knowledge, Siddhis and enlightenment from him celestially and He is beloved Dada Gurudev of the whole CharamMangal family, which is constantly protected, blessed and taken care of by Him.

Gurudev practiced deep meditation in the forests of Abu, where he was blessed with an enlightened path. With the Grace of ‘Saraswati – The Deity Knowledge’ he could recite all Holy Scriptures and spoke in many languages. HIS Blessings resolved the controversy of rights of Jain Tirth ‘Kesaryaji’. HE endorsed the truth that crux of every religion was to ‘Love Unconditionally’. HIS teaching was ‘Right understanding leads to knowledge and complete knowledge is Enlightenment’. This is reflected upon all those who worship his shrine in Mandoli (Jalore Distt.; Rajasthan), even today. The growth of CharamMangal is Blessed by HIM.